Isn’t it high time you upgraded your mobile browsing experience? Introducing Terra, an alternative web browser for your iPad from the creators of ReaddleDocs office suite. Think Safari with a few tweaks thrown in for a good measure. You can go full screen with a tap to make full use of iPad’s larger canvas and enjoy web content without any user interface elements getting in your way. Tap the icon in the uper right corner and boom – all your browsing controls re-appear.

Another cool feature is the offline browsing mode where Terra saves the page at hand – with all images preserved – for later viewing when there’s no Internet access available. Another useful enhancement is tabbed browsing mode that lets you quickly switch between open tabs using a three-finger swipe. The list of cool stuff doesn’t end here…

It’s got private browsing mode, passcode lock, custom search engines, AirPrint, inline search and in-app email. Plus, it lets you use iTunes file sharing to import bookmarks from your desktop or transfer downloaded files to a computer (yes, Terra lets you dowload files, unlike Apple’s Safari). In addition, you can change the user agent in order to fool misbehaving sites into thinking you’re browsing the web using desktop Safari, Internet Explorer 7 or Firefox. As a cherry on top, Terra can open saved files from other apps via the Open In menu, including Office attachments (doc, docx, rtf, xls, xlsx), PDF documents, web archives and even ZIP and RAR files.

It’s free and ranked as the #1 free app in the App Store so grab it now while it’s hot. Check out a quick video review below.

We first mentioned Fring in July of last year. They have been working on an application that rocks videochat on a handheld to something of a new level. Then earlier this month they released the Beta. If this is all new to you like it is to me, they designed an application that will set up a video chat room for up to four people at once. It’s available for both Android and iOS.

Fring released this promo video showing you the way this will allow you to connect with groups of friends to create unique personal moments of joy and beauty. It’s a fun little advertising spot and really does showcase the possibilities with this kind of technology. I especially enjoyed the short scene that implies you should take your friends with you when you’re peeing in public. It reminds me of a friend who would tweet their toilet shenanigans with alarming regularity, pun intended.

One thing I noticed…

Fringing? Really? It always bothers me when marketers jump forward like that and try mutate their own memes. It always looks and feels hokey and artificial. Listen up, let the meme pools do their work, that’s what they’re for. Google never wanted “google” to be an English verb (publicly anyway), that just evolved naturally out of the language.

Linguistic foibles and tangents aside, this app seems to be a similar tool to Cloudtalk, except Cloudtalk is more focused on asynchronous messaging, where there can be a significant time delay in response. Fring is more about synchronous messaging, where all parties are streaming the video data up and downstream at the same time. This is a good sign for the app ecosystems. These are similar, but slightly different applications that might be competing to fill a similar, but distinctly different, niche. Which do you prefer?

Tapbot just lifted the veil on Tweetbot, the firm’s newest iOS  Twitterclient. We’ve been using the client for a bit now and it’s definitely pretty versatile; it supports multiple accounts, as well as multiple timelines. So when we wanted to quickly pull up a specific list, we just had to tap the “Timeline” title at the top to quickly switch. The app offers “smart gestures,” too, which means you can triple tap a tweet to reply or swipe a tweet from left to right to view messages you’ve exchanged with that person. As with most Twitter applications, you can post your location, share photos, videos, manage lists, and more. Tweetbot also includes push notifications with support for Boxcar. We like the fast user interface, but wish that it supported active links within the timeline. The app currently forces you to click a tweet and then launch an embedded link. Otherwise we’re pretty pleased with Tweetbot so far. It’s available for $2.99 in the iTunes App Store and is supported on the iPhone, iPad, and iPod touch. Hit the jump for a link.

YOU NEED TO BE JAILBROKEN FOR THIS.

I was seeing lots of people changing their fonts to some cool ones and some people to nasty ones. Well so I decided I will also do this. The app which helped me was BytaFont. It is a app made by iPhoneruler.net and is available for free on Cydia. It is compatible with iOS 4.

It is very cool app for those people who don’t like the default font of the iOS and want to change it.

Instructions.
1. Search for BytaFont in Cydia.
2.Click Install.
3.The app will be installed but it has no fonts that come with it. You need to download them separately.
4.Download a font which you like.
5.Once download is complete go into the app and click on the font.
6.It asks to respring.
7.Press yes and your font will be changed. 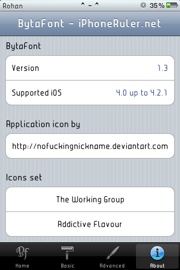 Skype for iPhone Gets Video Chat

Skype for iPhone has been just updated to v3.0. And Skype added one of the most awited feature to it “Video Calling”. It allows Video call feature over 3G or Wi-Fi to another iPhone or to a Skype desktop user.

– Make Skype to Skype video calls on Wi-Fi and 3G

– Recieve only video supported on iPad and iPod Touch 3G, with no camera

You can update the app directly from your iDevice or get it off iTunes. Tell me how you liked this update. Have Fun and Stay Tuned!!

VerbalVictor, an App that gives the Speechless a voice.

VerbalVictor is a new and upcoming App that aims at making it easier for people who can’t speak or and speech difficulties. It is a Soundboard styled App that is simple and easy to use. You have customizable picture icons which when pressed, say the name of the object. For example: On the screen you might see a picture of a Backyard, if it was pressed it would say “I want to go out and play”. This App was just an idea for the Father of a five year boy who had a rare generic disorder that actually delayed the development of speech. After knowing his child had speech difficulties, he was determined to help his little boy and others with Speech difficulties. Paul pauca is the helped create the App alongside some of his students over at Wake Forest University which is located in Winston Salem North Carolina. This App IS NOT like the rest, this App is a very Simple yet powerful and easy to use Soundboard program that helps people affected get their message across.

VerbalVictor is will be on sale in the App Store for only $10. A small price to pay to give the Speechless, a voice.

Please do not Pirate.

Infometer+,a new App by our Developer!

Infometer+ is an app wich allows you to see information about your device, as well as send your UDID via email. This app is being developed by zad0xSIS, and the graphics needed are being designed by Jason Pabon, Mike Dandy and Rohan Sood. This app should be available in Cydia in approximately two weeks. Nothing more, I leave you with an screenshot of the main interface. Merry christmas and happy new year 2011!

And this app is coming to the Apple App Store Soon!! 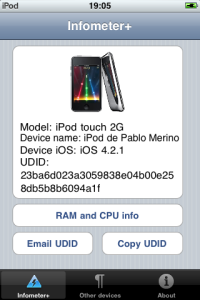 Here comes the 3-in-1 iPad Camera Connection Kit sporting a USB port, a SD card slot and a microSD card reader which works perfectly on iOS 4.2.1. It is important to note that the connected devices which require power of more than 20mA will not work with this 3-in-1 camera kit, since iOS 4.2 emits less USB power on iPad. Hit the review video after the break!

The 3-in-1 iPad Camera Connection Kit from M.I.C Gadget cost $29.90 and is available at the official store in both black and White color. Before ordering the kit make sure you read the shipping instructions.

For customers who have pre-ordered before DEC 20, this dongle will be shipped between Dec 24th and Jan 08th. New orders placed on or after Dec 28th are expected to ship between Jan 12th and Jan 16th. Please note that this batch will be the last production before Chinese New Year (Feb 3). Once sold out, new productions will start again after Feb 10.

As promised and demonstrated, Skyfire for iPad hits the app store to bring Flash video player, Twitter and Facebook to the iPad. The iPad’s app is separated form last-month released Skyfire for iPhone. Below is the full features of the app.

FEATURES:
• Play millions of Flash videos – everyday, with no limits!
• All-new ‘Skybar’ toolbar gives one-click access to video and related content
• Stay in touch: Unique Facebook and Twitter ‘Quickview’ allows you to see your wall and feeds with one click.
• Universal ‘Like’: Like ANY page on the internet, with one click.
• Fireplace: See only the links shared by Friends. Why? Filter what friends did from what friends shared (which is a great starting point for browsing)
• Popular: See what Friends and the Facebook community have to say about the site you are currently exploring
• Be informed: Quick access to GReader feeds
• Be social: Share via Facebook and Twitter
• Share to more services including GReader, Instapaper, Pinboard and Read It Later
• Standard browser elements: Tabs, search, sharing, bookmarks, history, etc.
• Full screen option for maximum use of screen real-estate – with scroll to top
• ‘Desktop’ option loads pages as on a desktop browser, giving more flexibility in accessing web sites
• Private Browsing option: Browse with no history and cookies left behind

You can get the iPad Skyfire web browser app for $4.99 via the iTunes link below or from the app store icon on your iPad:

I just beta tested an app a few days ago made by my good
friend zad0xsis. And to say I was amazed by it. It was quite an
amazing app.
Note: This app was earlier known as Zad0xNET.
Some
very good features.
-Faster than Safari -Very stable and very less bugs and glitches. It has been just updated to v0.7.
-An EasyGo menu which has bookmarks
-PC mode through which you can see the PC view of the webpage.
-Plays some Flash.
What’s this?
PeakNET is a
simple and easy to use web browser. This browser is like a Safari
but without cookies, bookmarks and history. It includes a
quickbutton to go to Google. It simply delivers to you the websites
you want, no more. More updates to come. This app is Retina Display
enabled.
Changelog zad0xNET
Changelog
v0.1-Initial release
v0.2-Minor UI improvements v0.3-Now you can stop loading a page
v0.4-Internal bug fixes v0.5-Autorotation and EasyGo™ menu
v0.5.1-Little bugs solved v0.6-Added PC Mode and new icon
v0.7-Changed the name, redesigned the GUI and added homepage
support This update would be send soon to ModMyi. Please wait until
then. Screenshots: 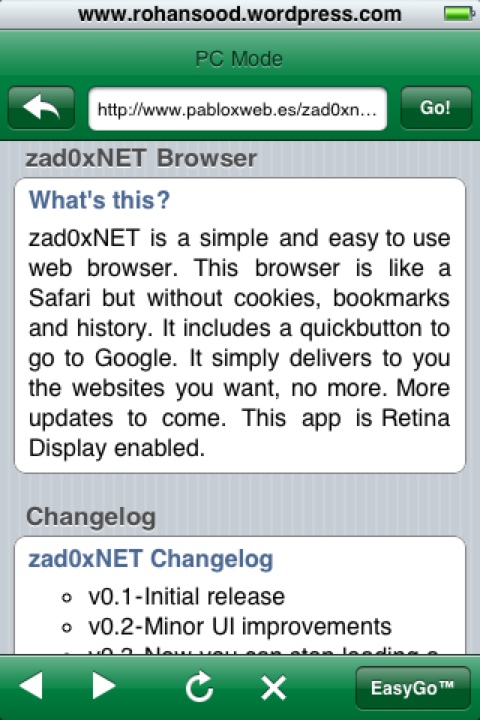 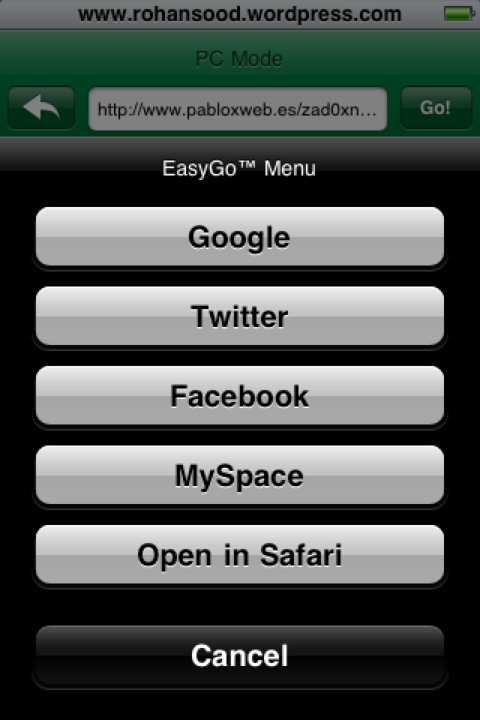 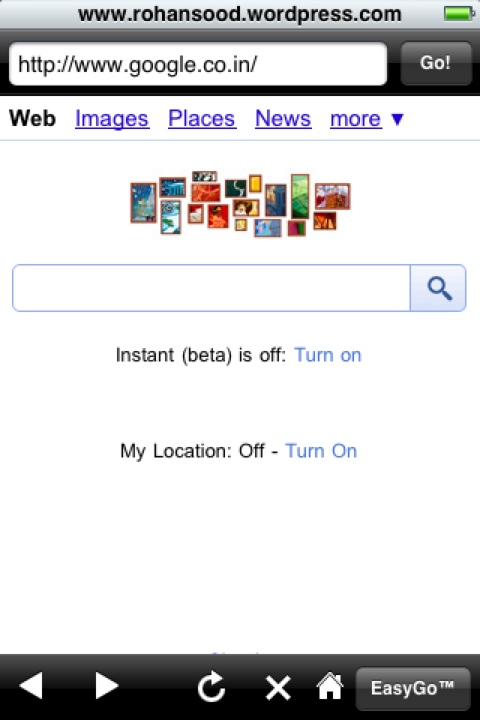