Gadget enthusiast blog M.I.C. Gadget has posted images of what it claims may be Apple’s next iPhone. The site itself seems skeptical as to the authenticity of the images — and we are as well — but they reveal what appears to be a thinner iPhone model with a touchscreen that is larger than the one found on the iPhone 4. It also appears as though the back of the device maybe be rounded like older iPhone models, but the images are very low-quality so it is difficult to say with any certainty. The images also feature the new proximity sensor seen on Apple’s upcoming white iPhone 4, but this has been pictured several times so it could certainly have been faked. Hit the break for a second image supposedly showing the face of the new iPhone next to an iPhone 4.

iPhone 5 to Start Production in September?

BusinessInsider relaysan analyst report from Avian Securities which claims that the iPhone 5 won’t start production until September and that this suggests that next generation iPhone won’t make it to the market until the end of the year or even early next.

Supporting out comments over the last month, conversations with yet another key component supplier indicates that production for iPhone-5 will begin in September. This is consistent with Avian findings in the supply chain in recent months and we believe the consensus view is moving towards this scenario.

Avian cites “key component suppliers” as the source of the information. They also revive the possibility of a cheaper/lower cost iPhone also in the works, but no new details.

While some may tire of the on-again/off-again nature of these rumors, the information from Avian is consistent with previous claims that no new iPhone hardware would be coming in June as well as claims that due to part production timelines, the iPhone 5 won’t be shipping until Fiscal 2012 (after September 2011).

We told you recently about a collection of photos sent to MacRumors of what the tipster claimed was a 128GB 5th generation iPod touch. And now another site has more photos.

As 9to5Mac points out, the photos and their contents are of questionable authenticity, though the particular photo above does at least look genuine.
The capacitive home button can be seen clearly above, a possible design choice that seems to have split the internet, with some liking the idea and others not so keen.
More photos when they pop up.
28.587087 77.054977

iPhone 5 not Coming on June ?

Reports on Tuesday suggest Apple will unveil the iPhone 5 at the end of June. This is not true. My sources said today that rumors of an iPhone 5 release at the end of June were completely false.
Anyway, we are still in the rumors phase, so we expect to hear more and more, but till now it’s highly expected to see WWDC 2011 free of new hardware. Let’s wait and see.

Google locking down Android? No. I doubt we could be so lucky.

Bloomberg reported today that Google is cracking the whip on Android phones, forcing companies to abide by anti-Android fragmentation clauses and not modify the Android experience too much. The Internet then blew up with “OMG! Is Android open source ending?” responses because it seemed Google was going to begin locking down Android.

The only problem is that everyone failed to recognize a line brought up in the BusinessWeek article that sparked the latest Android hubbub: Google has always locked down Android releases in its early stages. Qualcomm and HTC had to play by Google’s rules for the Nexus One, and NVIDIA and Motorola followed the leader to be first to market with the Motorola Xoom. Companies that want early access to the latest version of Android have to sacrifice their desire to heavily-tweak the software in order to beat other companies to the punch. While this may anger smaller companies, that doesn’t mean Google has fundamentally altered its plans for Android.

It seems Android phone and tablet makers are more upset that Google’s practices don’t give them enough time to alter Android as much as they would like. Discussions about the openness and promptness of Google Android code releases have popped up several times, so nothing has really changed based on this article. The dozen or so executives use as sources for the article may seem upset that Google is tightening its policies, but Google is not standing in the way of customizations, which a rep confirmed to us last week.

There are times I wish Google would be heavy-handed with Android because it would help alleviate the frustrations that come from the differences in processors, skins, and hardware issues that make it so difficult for apps to function in a uniform fashion. But I doubt that would happen since it would provide less options in terms of form factor and phone quality. That’s what made Android rise to popularity and diverting from that strategy could be a step backwards. Was Google’s end game to get everyone in the building and then change the rules once the door was locked? Possible but doubtful. Things in “Android Land” are the same as there were last year, just with a bigger crowd to control.

With Nintendo bringing its 3D-equipped 3DS to market, the whole world is going 3D crazy. Umpteen Android devices from various manufacturers are also due to get the 3D treatment in the coming months, but according to AppleInsider, Apple has been looking at adding 3D photo taking capabilities to its hardware (iPhone/iPad) for some time now.

The US Patent and Trademark Office has made public a patent application from Cupertino that relate to the taking of photos in 3D. The patent, named ‘Systems and Methods for an Imaging System Using Multiple Image Sensors’ would use two rear-facing cameras to create a 3D image just as the 3DS does.

The difference here is in the way the photo is created. Apple’s solution would take a hardware-based approach to stitching together the two images taken by the twin cameras whereas current 3D-capable machines go for a software approach. Apple believes this can introduce unwanted artifacts which they believe a hardware solution would cure.

The guys over NoWhereelse else have prepared an amazing infographic which illustrates all the rumors around the upcoming iPhone 5.

According to MacRumors, China Times reports that the iPhone 5 has entered the trial production phase, moreover iPhone 5 is due for production by the 3rd quarter this year. You can note that the details came from China Times is confirming all previous rumors which claimed that iPhone 5 will have a metal chassis to improve antenna sensitivity and the amazing 4-inch touch screen. 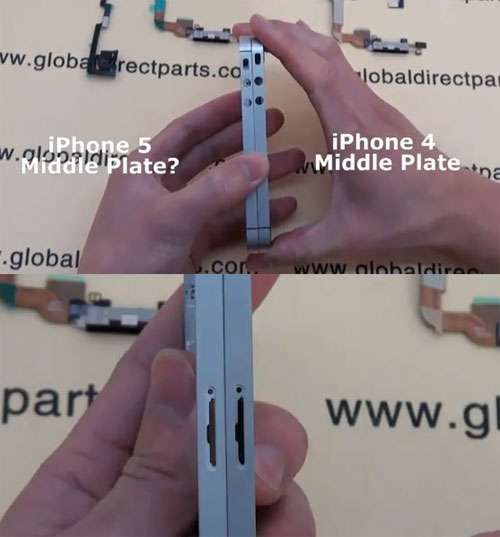 On the other hand, the floating rumors so far pointing to an iPhone 4-like frame for the new iPhone 5. The above photo surfaced in January you can check this device in video from here.

Stock shortages of the first-gen iPad are being cited as evidence that Apple is readying the second-gen model for imminent release. UK retailer Carphone Warehouse is out of stock of all 3G-enabled models, as well as the 64GB WiFi version, while carriers in the country have already started throwing further subsidies at the Apple tablet, potentially to clear out final supplies.

Orange UK is now offering the iPad 3G from £99 ($160), half price compared to its regular subsidy, as long as buyers take out a 24-month data agreement. Meanwhile, reports of stock shortages have also been reported at European distributor Ingram Micro, with no remaining supplies of of the 16GB and 64GB WiFi-only iPads or of the 64GB 3G iPad, and “very low” supplies of the other versions. Canadian retailers are also believed to be affected.

Apple is expected to announce the iPad 2 imminently, with the tablet believed to have the same size and resolution of display but use a new, improved IPS panel with reduced reflections and better outdoor visibility. Slimmer and flatter than the first-gen iPad, the iPad 2 is also expected to add in twin cameras for Face Time support.